The mission of Acciaierie d’Italia is to provide with the needed steel the most relevant Italian and European industries: from automotive to construction, from manufacturing to food processing.

The current historic juncture imposes the confrontation with the needs of a constantly evolving world, where we expect that the demand for steel continues to grow along with the request of more attention to sustainability and to the establishment of a true circular economy. We aim at keeping our leading position in our Country and abroad, building on the quality of our products as well as the care of our Clients, by providing them with solutions just tailored on their very needs.

Our mission could be achieved only thanks to the efforts of all people who day after day contribute their commitment and their passion to support the growth and the future of Acciaierie d’Italia.

We owe Oscar Sinigaglia, an engineer and entrepreneur from Rome, the far-sighted choice of making Italy a great steel producer, that became reality in 1948, when Rome’s Government approved his plan for the steel industry, that the same Sinigaglia successfully implemented in the following years as chairman of state-owned holding company Finsider.

The pro-steel choice showed to be vital for Italy’s industrialization process, from motorization to the home appliances boom, from housebuilding to infrastructures expansion.

It was the celebrated Italian ‘economic miracle’, the Country was running towards the future, that to be built needed always more steel. A new great production plant was to be added to the existing ones of Cornigliano, Piombino and Bagnoli.

In year 1959 the decision to build it in Taranto, because it was a Southern Italy city, already had a large harbor and more than other port cities of the area had also grown an industrial culture, due to the ship building activity and the Navy Dockyard established in there. 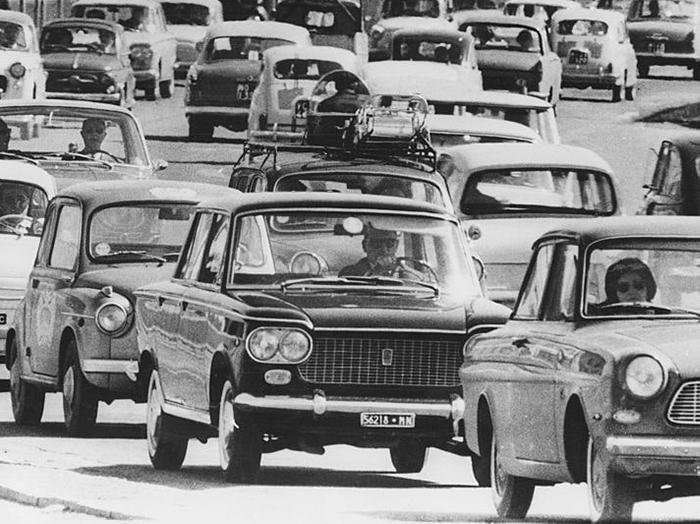 Steel is a basic material that permeates the entire industrial production spectrum, from the mechanic in all its segments, to house building and infrastructures, up to the food processing, as it provides metal plates for cans and other containers. It is 100% fully and endless recyclable too, as it can be reused several times with techniques that see Italian companies at the avantgarde.

The capability to produce great volumes of this vital basic material, fundamental and permeating so many key sectors of the economy, was the precondition for Italy to stand out as a big manufacturer and remains vital for the growth and the competitiveness of the Country.

That is the reason why continuing to make steel in Taranto, the sole integral cycle Italian plant, that produces primary steel (directly from iron ore), is a decisive factor for the future, which the Country just can’t do without, and has indeed to be strengthened. The question for Italy is not “if” producing steel at the Taranto plant, but make it in a safe fashion, protecting both the environment and the people’s health. 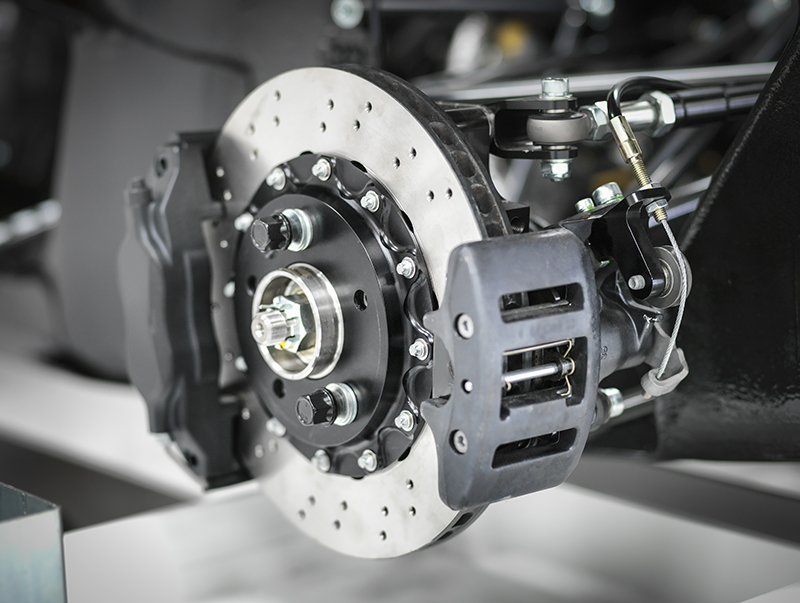 Acciaierie d’Italia did take the challenge and is gearing up accordingly.

In the last few years, part of the journey has already begun with noteworthy results, such as the covering of coal and ore iron conveyor belts over a length of 85 kilometers on a total of 90, with the coverage of the main part of mineral parks and the subsequent abatement of emissions and dust. The process has to be completed in order to achieve a cent per cent safety for the health of citizens of Taranto, where indeed epidemiologic data show a substantial improvement compared to the past score and to other cities much less industrialized of the same Puglia region.

The Taranto steel plant is now the Europe’s cleanest but that is just not enough, as we are starting a process of deep transformation focused on the environmental sustainability and the ultimate goal to increase the output along with the competitiveness of the products both in terms of quality and price. The quantitative target is to bring the production to 8 million tons in 2025 from the current level of around 4 million, with the mid-term objective, to be reached when technologies will allow to produce green hydrogen (exclusively with renewable energies), by using the same hydrogen as fuel.

This transformational journey, involving materials, processes, organization and training, is a major test for the entire Country as well as a unique occasion for Taranto, that will be at the center of it. The overhaul of the steel plant will involve all the satellite activities and will ultimately increase the competitiveness and the market positioning of the industrial complex, with benefits for the entire city.

All this is happening with plenty of transparency and the involvement of the local communities and their stakeholders, that are allowed and have to control the developments and the effectiveness of the whole process.

The strategic alliance between the State-shareholder and ArcelorMittal, a global giant of the steel industry, is aimed at the best interest of all the involved parties and the entire system. ArcelorMittal is assuring the full access to the global market and at the same time is acquiring from this transformational experience the technologies needed to make its plants across the world even more sustainable, while the Italian State joins a profitable business, protecting the citizens and warranting the Italian industry a domestic high quality steel production which is vital for its international competitiveness. Producing more and cleaner steel also allows Italy to reduce imports (often from countries not complying with European environment standards) with valuable effects on her trade balance and on the global environmental equilibrium.

A new era is beginning for the Taranto steel mill.

Sites and structures of Acciaierie d'Italia occupy an area of more than 17 million square meters and employ more than 10,000 people, to whom are to be added the workers of the satellite activities.

The Taranto plant is the sole in Italy with integrated cycle and is fed by raw materials through 4 lease facilities in the Taranto harbor. The fleet, managed by ADI Servizi Marittimi and boasting 1 cargo vessel, 4 pusher boats and 8 barges, is also used for transport services to the Genoa site and from there to Novi Ligure, Racconigi, Legnago and Paderno Dugnano.

The Taranto site is also equipped with 200 km of railroad, 50 km of roads and 90 km of conveyor belts for the moving of raw materials.

To verify the full compliance with the sustainability goals, the Taranto plant is subject to more than 1,000 environmental samplings every year. 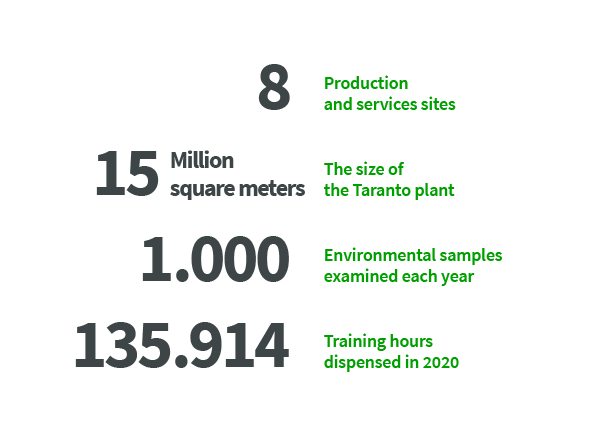 Our assets: plant and facilities

Inaugurated on November 27th, 1964, the Taranto steel plant – Europe’ largest and among the world’s biggest – is integral cycle, from the processing and transformation of fossil coal and ore iron to the output of products such as black coil, cold rolled or galvanized, zinc coating, SAW and ERW pipes. The steel mill not only delivered the finished products to the domestic and international markets, but was also feeding, with the additional output of the Genoa and Novi Ligure plants, large sectors of the national industry.

The steel mill uses 4 port docks for the moving of raw materials and the shipment of finished products, with 200 km of railroad, 50 km of roads and 90 km of transportation tapes. Its coastal positioning also allowed the development of advanced industrial and logistic structures for receiving raw materials and products shipping. 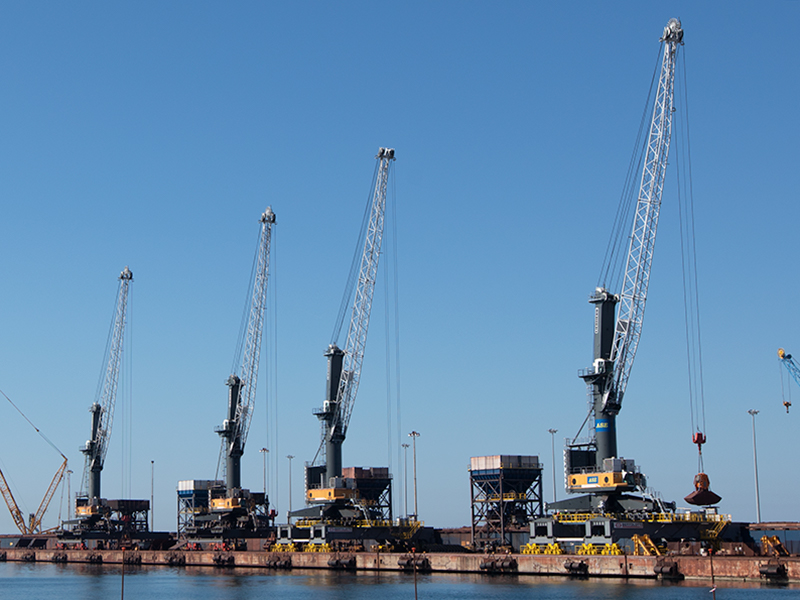 The plant of Genoa Cornigliano was designed at the end of World War II and started integral cycle production in 1953.

With a nominal yearly capacity of some 1.5 tons of finished product, the plant is the sole in Italy with the capability of producing tinned band and electrolytic chrome-plated band.

The Genoa industrial site represents both a logistic hub and e transformation center. Finished and semifinished products are received into the port docks managed by the company.

Thanks to its strategic location, the site represents the natural link with the plants of Novi Ligure, Racconigi and Paderno Dugnano and, more in general, with the markets of Northern Italy and Europe. 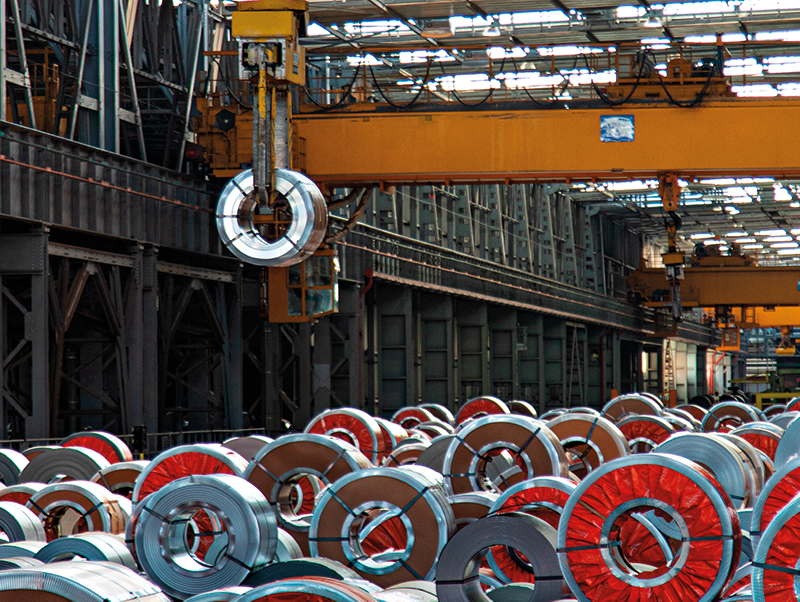 The plant of Novi Ligure was inaugurated in 1962, next to the areas previously occupied by “Ferriere di Novi Ligure”. In 1981 it was handed over to State-owned Italsider, which in 1989 would become ILVA S.p.A. In the early 90s the plant was empowered and modernized to reach a 2 million tons production volume per year.

The Novi Ligure industrial complex is devoted to the production of zinc and cold rolled. It receives the semi-finished products (cold rolled coils), shipped from the Taranto plant to Genoa, both via railroad and road transport.

The steel produced in this plant is used to manufacture barrels, house appliance components, pipes, enamel coated hygienic and sanitary apparels. As the site is in a strategic position to reach the most industrialized areas of the Country, it produces components of the highest quality for the automotive industry too. It boasts plants of elevated capacity and efficiency, among which: a pickling tandem cold rolling mill (PCTM), annealing lines both static and continuous, hot-dip galvanization lines, aluminizing and electro-galvanization. 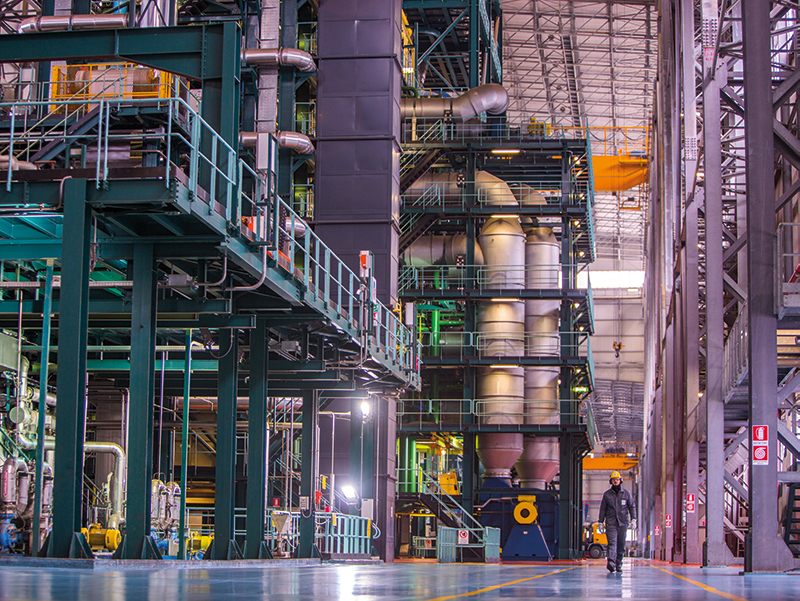 Also other sites of Acciaierie d’Italia are centers of strategic importance for the company activity.

In Paderno Dugnano and Legnaro the steel coils originated from other plants are transformed into plates and narrow stripes through operations of longitudinal cutting (Slitter) and transverse cutting (Shearing). The Legnaro facility is supplied through the Marghera harbor, which receives the coil cans from Taranto.

* The plants are owned by Ilva in Extraordinary Administration.

Some of our Companies

The company manages steam and electricity production for the production plant of Taranto.

The two electric power production plants in the Taranto site, fueled by gases produced in the steel industrial processes, represent a major asset for the Group and supply almost the entire energy needed for the plant to work. In case of over-production, the exceeding energy is channeled into the national electric grid.

ADISM takes care of maritime transportation within the Group and is fully integrated into the productive cycle of Acciaierie d’Italia plants. Its routes depart from the Taranto site and from the Ionian sea head towards the Tyrrhenian and Adriatic seas.

On the Tyrrhenian route, ADISM transports the semifinished and finished products to the Genoa site, from where they are transferred on rail or road transport to the Novi, Paderno and Racconigi sites.

On the Adriatic route, products are shipped to the ports of Ravenna and Marghera. Those products are mainly earmarked for final clients, and they are also channeled through to the Legnaro site, with road transport from Marghera. 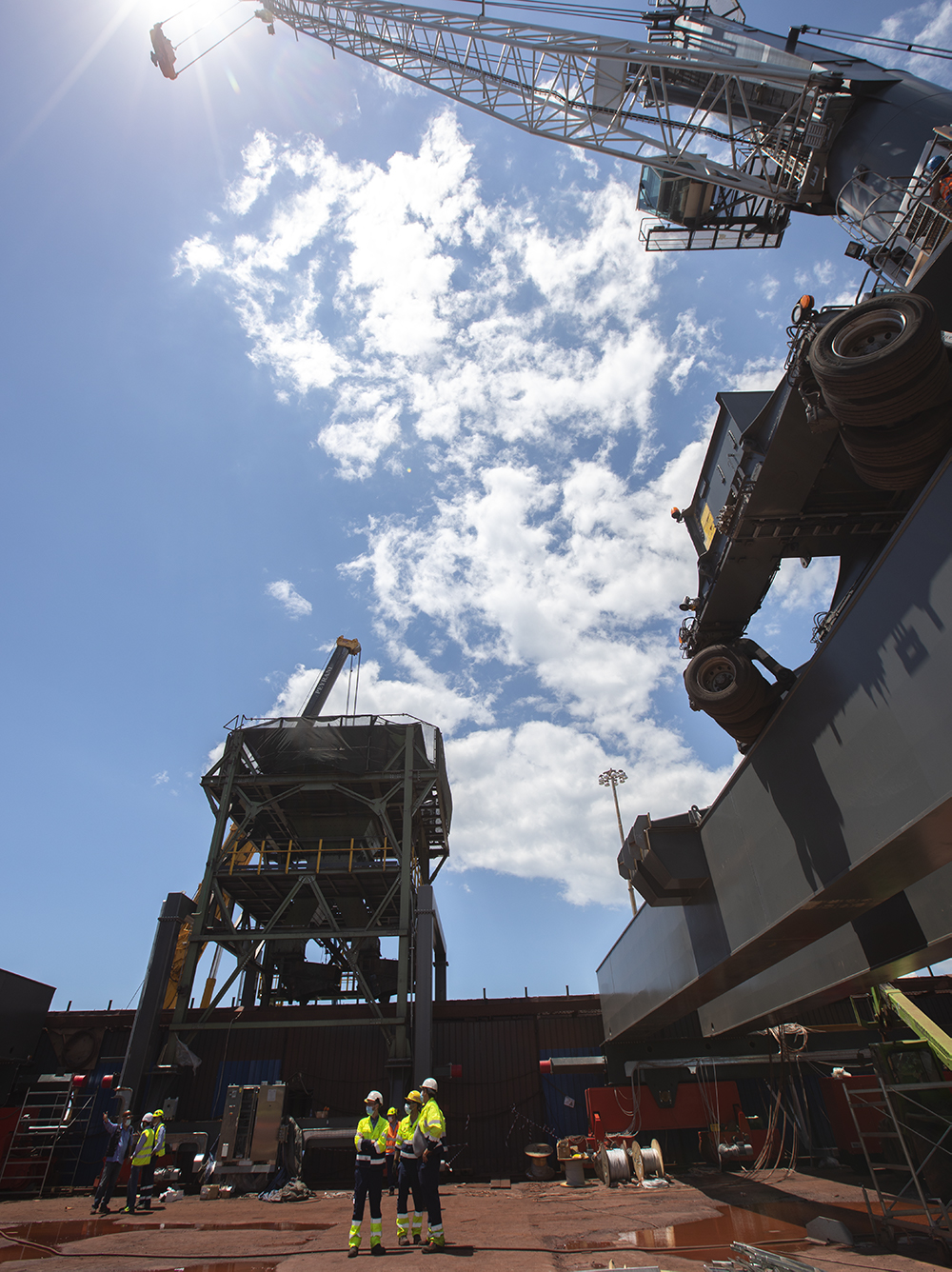 In Genoa is established the Limited Company ILVA, named after the Latin name of Elba island, from where originated the iron ore used in the first plant of Bagnoli, near Naples.

After the crisis of 1907 and the contraction of Italy’s steel market the Ilva Consortium was created. It gathered the entire Italian production of cast iron for blast furnace and 58% of the steel one.

The Company, then named ILVA Alti Forni e Acciaierie, along with other companies of the steel industry, is taken over by the newly created IRI, the Institute for the Industrial Reconstruction.

The building of the Fourth Steel Center with integral cycle gets started in Taranto. At the same time works began to build the Novi Ligure cold rolling plant.

The Company turned its name in Italsider after the takeover of ex SIAC- Cornigliano. The following year, the Taranto industrial site was inaugurated.

Starting June 3rd 2013, with the Decree 61/2013, ILVA S.p.A was placed under receivership. From January 21st 2015 the Group was admitted the extraordinary administration procedure.

In June 2017, following the award of the auction called by the Ministry for the Economic Development, the company was transferred under control of Indo-Luxembourg Group ArcelorMittal.

On December 11th 2020 ArcelorMittal announced it has signed an investment agreement with the National Agency for investments attraction and business development S.p.A. - Invitalia – to form a public-private partnership.

April 15th 2021 is the date of birth of Acciaierie d’Italia, with a 62% stake owned by ArcelorMittal group and the remaining 38% to the National Agency for investments attraction and business development S.p.A. – Invitalia.